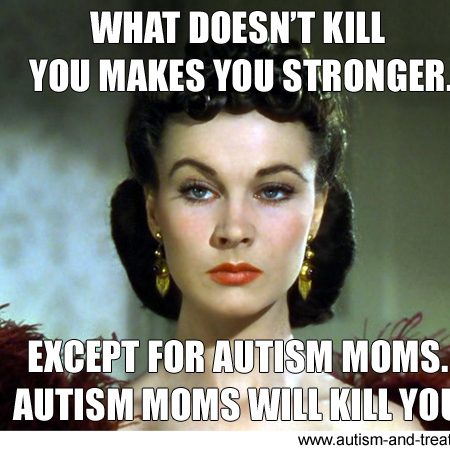 An excerpt from I KNOW YOU’RE IN THERE by Donna B.

(Another Mom in the A-Club)
www.autism-and-treatment.com

Full disclosure: Back when I was single, child-free, and clueless, I thought I knew best, rolled my eyes and spouted my opinions with the best of them. I had opinions about how I would and could do it better and smarter with my own child. I could raise the perfectly behaved, perfectly coiffed, perfectly smart little lady or gentlemen with one hand tied behind my back.

I knew when I became a parent my lifestyle wouldn’t change just because I had a kid. Children should be required to adapt and fit into the lives of the adults raising them. That’s how my single friends and I saw things. After all, that’s what life is, right? Adapting? Although I never directly criticized anyone, it was almost like I had. The look on my face probably said it all.

All that happened before reality came along in the form of a picky-eating, tantrum-throwing, hand-flapping, non-talking, oddly-behaving runaway train that permanently knocked me and my precious opinions off of our comfortable pedestal. Karma wasn’t just a bitch. In my case, Karma had a name, a face, the sweetest smile, and promptly kicked my smug, opinionated behind from here to Sunday.

If I had a dollar for every time some stranger shook their head and gave me the stink-eye as they said, “Can’t you control your child?” or “Somebody slap that kid!” … well, I wouldn’t exactly be a rich woman, but I could easily host a weekend at Disneyland for a family of five with meals, souvenir hats, and sweatshirts included.

When Aiden behaved oddly, inappropriately, or had a meltdown, some of these helpful people scolded my son because he wouldn’t look them in the eye or answer when spoken to. Some even unabashedly informed me that my method for dealing with a particular issue was definitely wrong.

Here are just a few examples: Once in a restaurant ladies’ room, an elderly lady looked down her nose as I helped four-year-old Aiden wash his hands and said, “If you wash his hands for him, he’ll never learn how to do it himself.” Oh really? Another time, when I stopped in at Target to pick up some diapers and an antibiotic for one of Aiden’s many painful ear infections, the checker (that’s right, the checker at Target) narrowed her eyes at my crying child and said, “If he was MINE, he’d be in time-out right now.” Um … okay. I’d love to have seen her try it. Another woman thought it perfectly appropriate to inform me, loudly, that my child was too old for Pull-Ups.

But the Grand Prize for the Stupidest, Most Ignorant and Most Ridiculous Comment of All Time (I’m calling it the S.M.I.R.C.A.T. Award — the acronym is mine, but feel free to submit nominations) goes to the woman who, after being politely informed that the reason for my child’s behavior was autism, announced, “Well, then, if he’s autistic, you shouldn’t be taking him out in public.” Seriously? Seriously??? I almost took the *&@!% out with my bare hands.

I suppose my Karma would be useless if I didn’t put it to good use. So I’ve come up with a list of things for my inner armchair judge to remember next time I have the urge to criticize someone’s parenting, child, or children.

Five Important Things to Remember the Next Time Someone Else’s Child Makes Me Want to Reach Over and Slap Them:

1. That parent and child are not having a good time right now. Don’t add to their stress, just because you are annoyed.

2. That child could have a disability or be ill or in pain. The point is, you don’t know why that child is upset, not listening, or misbehaving. Don’t assume anything.

4. Instead of criticism, offer help and/or sympathy if it seems appropriate. Leave them alone if not.

5. Save your opinion for the next time you do jury duty, where it might actually do some good.

Instead of judgement, compassion and a helping hand can go a long, long way. I learned that lesson the hard way.

Phone: 805 497-8202   Email: hindssite@verizon.net or marcia@autismandtreatment.com
There is more info to help on my website.

How to Get Through a Blood Test Without a Meltdown
February 26, 2018

You Worry About Everything When Your Child Has Autism
August 15, 2017