Autism and Siblings: What Was It Like to be Ryan’s Sister? 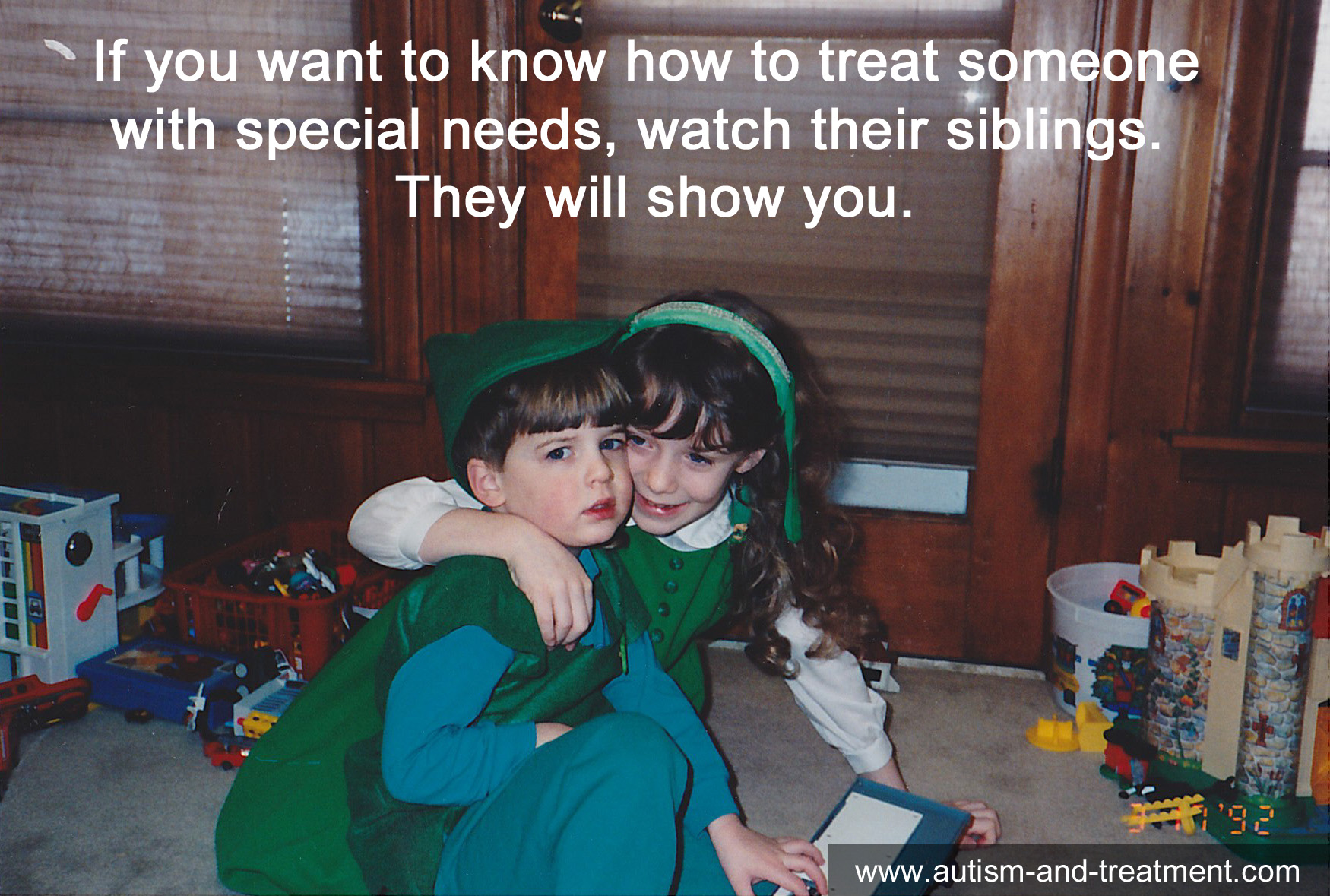 Most parents feel that there is never enough of them to go around. But when one of your kids has autism, a constant concern is the effect this diagnosis will have on your other children. My life, our family’s life, was Ryan, Ryan, and more Ryan.  Our days revolved around Ryan’s needs, his therapy schedule, and all the things we had to do to help him.

Ryan was over-parented and my daughter, Megan, was under-parented. After Ryan was diagnosed, I worried if my daughter was getting enough time and attention. In the process of trying to save Ryan, were we messing up our other child? And please God, don’t let Ryan become an endless burden for his sister after we are gone.

Megan was unusually patient with Ryan.  Sometimes it was her quiet love for her brother and thoughtful suggestions that held our family together when the stress of having a child with autism was tearing us apart.

Ryan pinched Megan, squeezed her arms, and pulled her hair until she cried. Yet, she still loved him.  When she’d ask me if she could hit him back, my reply was, “When he gets better, you can hit him.”  Of course at that time, I didn’t think he could actually get better.  I had no idea that one day he would recover and become an aerospace engineer.

Today, this awful example of parenting-on-the-edge continues to be a big joke between my kids.  Most siblings don’t hit each other when they are adults. But when Ryan is a smart ass or does something Megan doesn’t like, she slugs him. Then they laugh and share a look of understanding.  Even though he towers over her, she will always be the big sister and he will never hit her back.

When Meg was only seven, we made her part of Ryan’s educational team.  Her job was to teach her brother how to play and pretend. Megan was better at that than any of the adults who worked with him.  She was a gifted therapist and still is. Because of her brother, she is now a Board Certified Behavior Analyst (BCBA) who works with children with autism.  Megan currently supervises behavior therapists for the Lovaas Institute and changes lives daily.

Making Megan part of our team also helped her.  She got praise and credit for the great therapy and love she provided. As a result, she didn’t resent her brother as much for taking so much of our time.

Another thing that helped was our special time together. No matter how crazy our week had been or how little attention she got, she knew every Saturday night, it would be just the two of us.  And she didn’t have to share her mom with anyone.

We would plan all week long for our time.  We’d secretly buy candy and treats that Ryan wasn’t allowed to eat.  We’d whisper about the things we planned to do, and stash our goodies in secret hiding places. When Saturday finally arrived, the boys would take off on their own adventure.  It usually involved riding the elevators at the local hotel or visiting the extension cords, the plugs, and outlets at Jerry’s Hardware Store.  Those were Ryan’s obsessions at that time.

After the boys left, Megan and I would cuddle on the couch, overdose on junk food, and watch her favorite TV show, Dr Quinn Medicine Woman. Those Saturday nights are still wonderful memories for us.

During Megan’s middle school years, our special time evolved into walking our dog, Snooper, around Bredesen Park each day after school. We’d talk about her hopes and dreams, and gossiped about her friends and all the things that happened that day. During those times, I’d try to slip in the important values she needed to learn, without sounding like that was what I was doing.

Middle school was a tough time for Ryan’s sister.  Kids at that age think everyone is watching them and are easily humiliated by the things their parents do. But it’s so much worse when your brother with autism. Especially when he has one of his meltdowns, or picks his nose and eats it in front your friends. Nonetheless, Megan still protected Ryan from the other kids who bullied him.

Through Ryan’s high school years, Megan became being the brother Ryan never had.  She answered all his questions about social issues.  She schooled him about relationships with peers, sex, and even how to ask a girl to a dance.  She made sure he dressed cool instead of nerdy. She knew if Ryan was going to fit in, she would have to be the fashion guru, because my idea of high fashion was tie-dye shirts and sweat pants.

I shouldn’t have worried about Megan as much as I did.  She is a better person because of Ryan’s autism.  Not all siblings have the same happy ending. They are at a higher risk for psychological problems.  But the challenges of being Ryan’s sister helped her become who she is today.  She will always be a giving and compassionate person that stands up for those who can’t protect themselves.  It is the way she helps children with autism and their families that makes me most proud. Still, I sometimes wonder how different her life might be if our house had been autism-free.

Phone: 805 796-8213   Email: For help finding a doctor marcia@autismandtreatment.com
There is more info to help on my website.

Don’t We Love the Holidays? And Why Are Everyone Else’s Kids Always Perfect?
December 2, 2017

My Husband Is Father of the Year! – Guest Blog by Natalie Renee Steffen
January 24, 2015